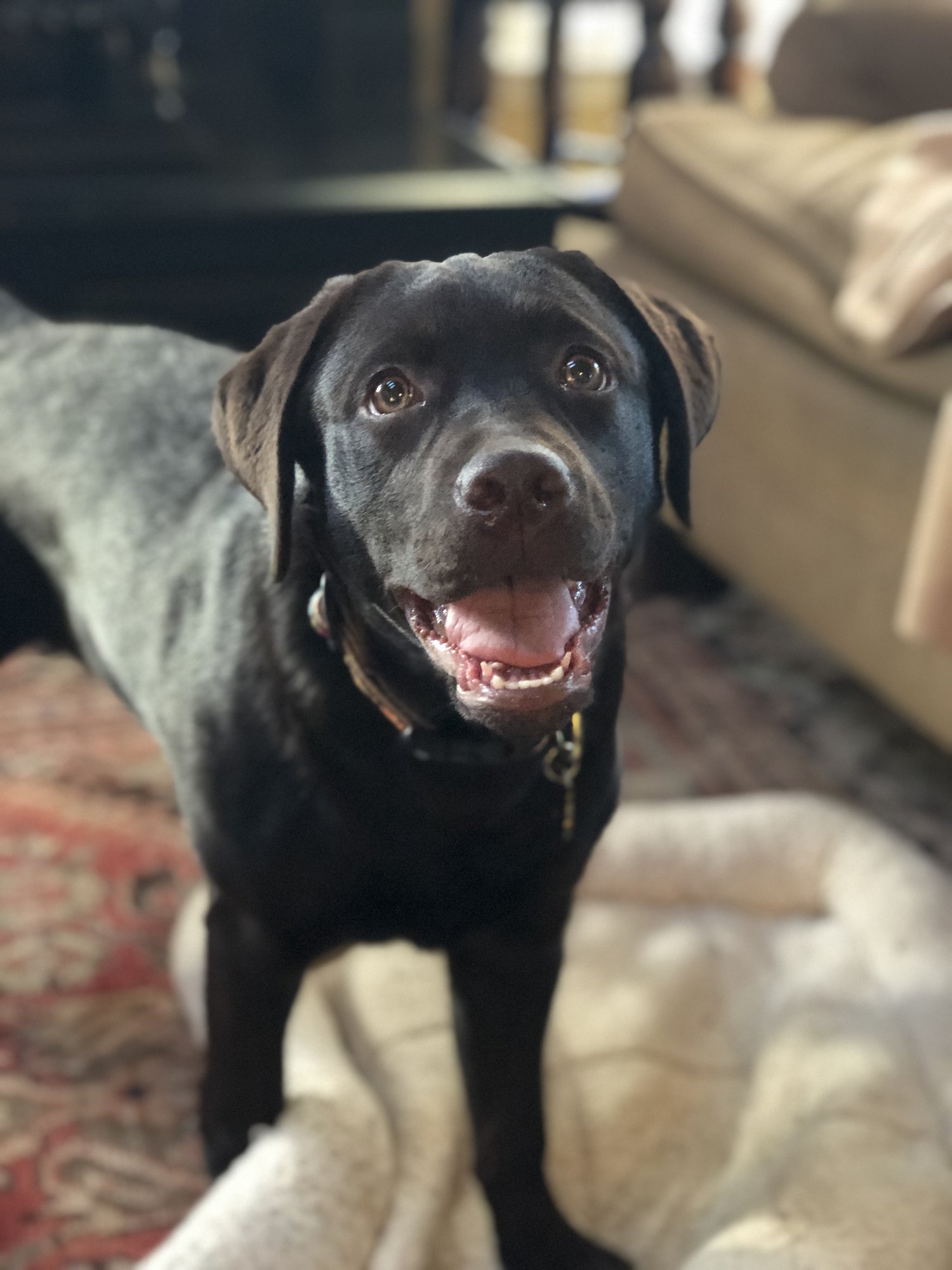 Lucy and her kennel pad - it’s a favorite toy lately for Lucy, who is experiencing raised levels of hormones!

Wintertime calls for more creative play with our chocolate lab puppy, Lucy. She was taking two walks a day before it turned 17 degrees outside. So now there is a lot of playing with a toy we call, “Black Bear,” a worn long-haired synthetic scruffy looking bear skin with no stuffing.

I spend about an hour each morning playing tug-o’-war with Lucy with Black Bear while I chant the familiar children’s book rhyme, “Black Bear, Black Bear, what do you see?” and I answer myself with “I see Lucy looking at me.” Then “Lucy, Lucy, what do you see?” and “I see the Black Bear looking at me.” It’s our routine each day after she enjoys her peanut-butter filled frozen Kong while I get my high schooler off and she eats her breakfast. 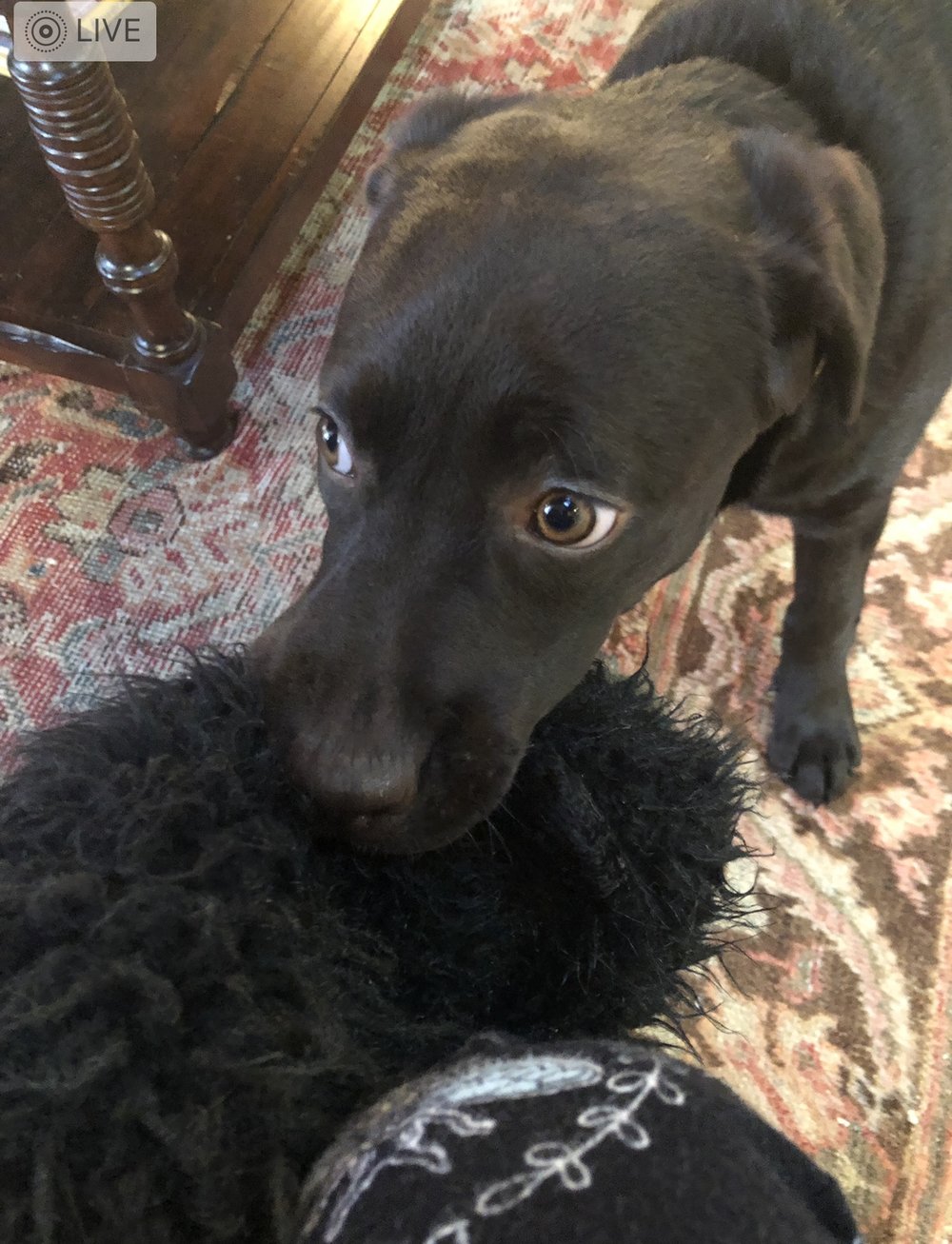 “Black Bear, Black Bear, what do you see?” Mom and Lucy - that’s what we play every day.

After “Black Bear,” Lucy chooses her stuffed fish toy or the crocodile for tugging or running and fetching. There are literally dozens of durable stuffed and unstuffed toys handed down to her from Cassie, our beloved black lab who passed away last winter. The family room floor is usually covered with toys! And none of them are new - all hand-me-downs! But now, Lucy has started a new activity with her cream-colored lambswool kennel pad.

My husband, Dave would say, “What’s the deal with her taking the kennel pad out every day?” I said to David and our son, Wesley, “I think Lucy is humping her kennel pad.” They both said, “No way! Only male dogs do that!” Dave would insist that she was making those gestures just because the kennel pad is so cumbersome to carry around. But the other day, Wesley spent an afternoon with Lucy when we were gone. He had one-on-one time with her and had plenty of time to observe her. 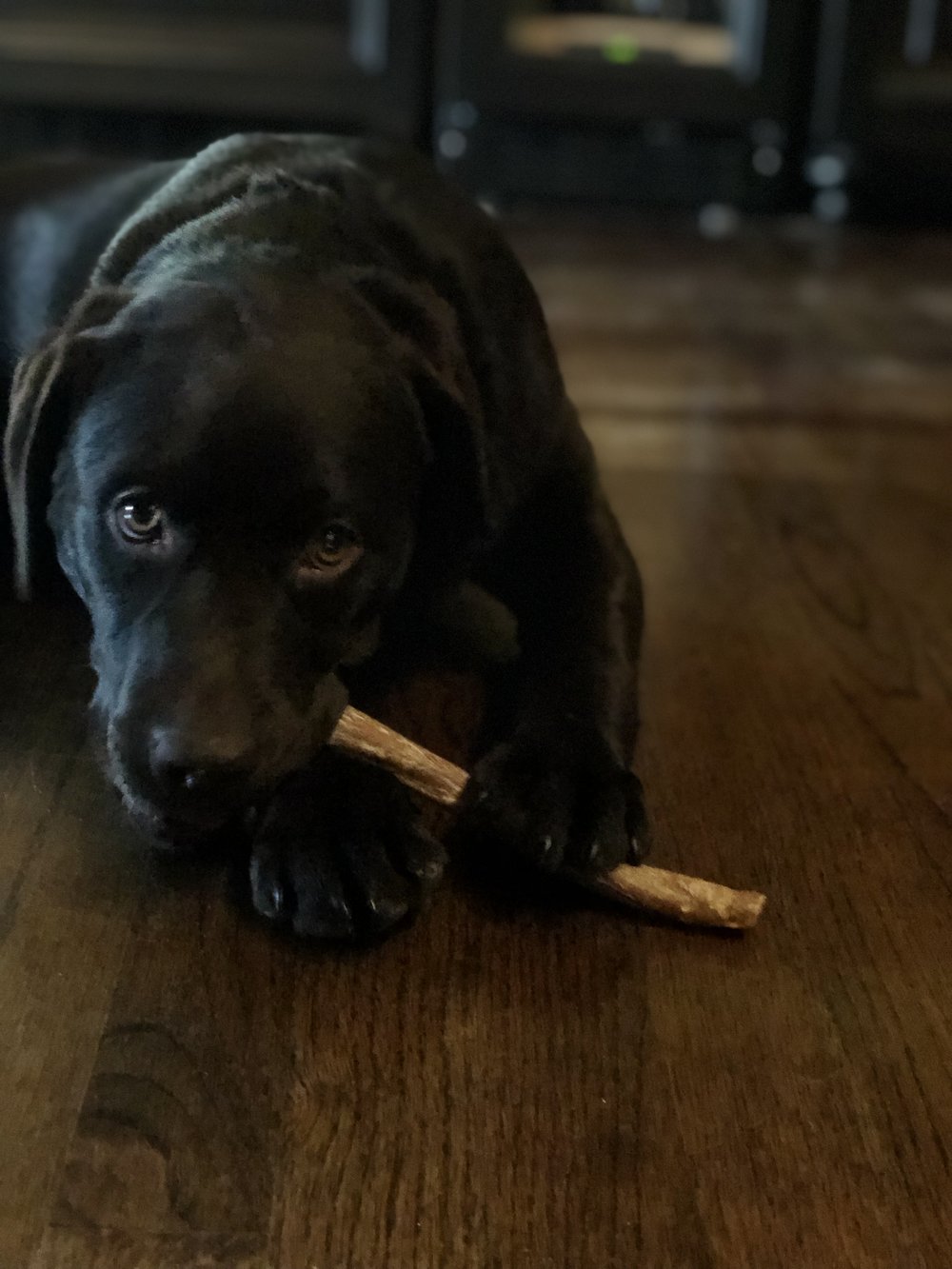 Bully sticks are always a good option for a teething puppy. One of Lucy’s favorites! Especially when Mom is busy with her morning routine.

We got home, and he said, “Well, she’s humping her kennel pad.” Again Dave denied the accusation, and Wesley put it another way. “Dad, it’s hormones. Believe me.”

Hormones! Our baby puppy is already a teenager at five months old! That was quick. I couldn’t believe the confirmation of what I really already knew. I was dreading someone else actually agreeing with me. This made it so permanent. I decided to call the vet the next morning.

So I talked to the receptionist who said I really didn’t need to speak to the vet about the situation. She confirmed that it WAS hormones and that it was totally normal for any sex puppy to do it during play. She said sometimes when they are around other dogs, they would do it to show dominance, but around people, it was probably meant as play.

Play?? To me, it hard to watch. She starts doing it and I just have to tell her to stop. But of course, she won’t. So the vet receptionist recommended we get a spray bottle of water and squirt her when she does it. This is to distract her and get her mind off it! Oh geez. Whatever! I’m not sitting around with another spray bottle. I already use Listerine in a spray bottle when she chews things.

I just never dreamed I would go through this fun little stage with a girl…..I asked the receptionist if this meant she would go into heat soon and she said, “Well, it’s probably not too far away but mostly likely six months old.” Oh great. It’s coming soon.

Well, Lucy is not spayed yet and we expect to have her surgery around six months of age. Poor thing! I dread for her to have stitches in her little belly, but it will be the best thing for her and our family.

Until then, we will probably not use a spray bottle with water - mostly likely some other method of distraction. Turns out raising a puppy is not that different that raising a child in some ways. But Lucy needs to “edit” her behavior a bit when it comes to managing her hormones!